Impact Crate
Twinzer is a battle-car released on May 29, 2018. It can only be obtained from the Impact Crate[2], and is classed as Import.

Its design is based on the popular Octane and a buggy. However, it's different in that its engine is on the front and it doesn't have a spoiler.

Twinzer can be equipped with the following decals:

Note: Vehicles can also be equipped with any of the universal decals. 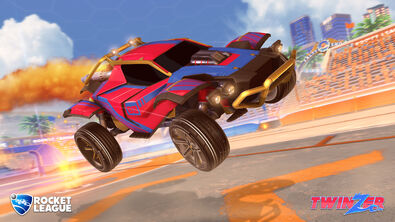