Trading is an online feature in Rocket League. The feature was implemented in Patch v1.22, on September 8, 2016.[1] The trading system allows players to exchange Rocket League items with one another. Players may only trade with each other if they are on the same platform.

For example, on Steam, a player needs to be friends with the person they wish to trade with. After that one can invite (main menu: "Create Party" button) the player to join their party inside the game.

Multiple items can be traded in any transaction — it all depends on the mutual agreement between the two parties.

Refer to these popular websites where anyone can browse and search items that other Rocket League players have and want:

Trade restrictions help build a safe trading environment for all players. To trade with other players, you must have the following[2]:

Once the above requirements have been met, you can trade with other players.

Trading limits may apply depending on your current XP Level. See the break down below:

"Trade and receive one or more items with another player in a single transaction."

After a player's first trade, they will unlock the trophy achievement "Swap Meet." In order to unlock the achievement, the player must have exchanged one or more items in the trade. 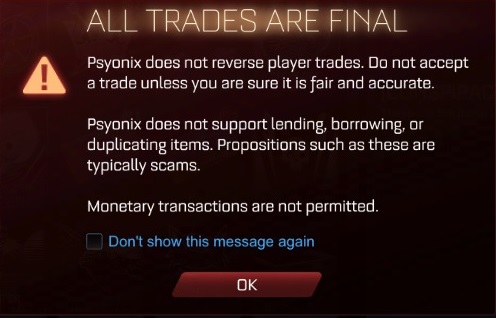 Remember! It is the responsibility of all players to ensure that a trade is fair and equitable before accepting the trade. Psyonix's support team cannot intervene in trades.[3]