Originally called Neo Tokyo, it was renamed on May 10, 2017, due to a standardized version of this arena being released with the same name.

As of March 22, 2017, this arena can only be played in Exhibition or Private matches. Otherwise, it is available in the online Rumble playlist since September 28, 2017.

Tokyo Underpass's origin began as the popular Rocket Labs arena, Underpass. This was the first arena to have multiple levels and was inspired by feedback from top-level players. Now, it returns with a fantastic visual theme and streamlined game-play improvements.[1]

On May 8, 2017, Psyonix announced that Neo Tokyo would be re-released with a standardized layout, and that the currrent iteration of the arena would be renamed "Tokyo Underpass".[2] 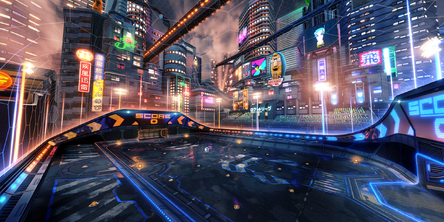 Neo Tokyo
Add a photo to this gallery

Retrieved from "https://rocketleague.fandom.com/wiki/Tokyo_Underpass?oldid=42945"
Community content is available under CC-BY-SA unless otherwise noted.