Single-player
Multi-player (2-4 locally)
Multi-player (2-8 online)
Supersonic Acrobatic Rocket-Powered Battle-Cars, also known as "SARPBC" or "Battle-Cars," is a battle-themed arena game that involves car racing and the game of soccer, was created by Psyonix and was released on 2008-10-09 for the PlayStation 3.

It is the predecessor to Rocket League.

The player controls a Battle-Car which they use to direct a ball into the opposing team's goal on a pitch, known in-game as an arena.

The game can be played by one or more players, locally or online.

"Take matters into your own hands in this visceral, high-octane, physics-based vehicle sports game that lets you choose one of a variety of high-flying cars equipped with huge rocket boosters. Soar high into the air to score amazing aerial goals, perform incredible saves using the vehicles' acrobatic abilities, and even demolish enemy players at supersonic speeds! Every point is immensely satisfying when you must propel your entire car at just the right angle and speed to send the ball flying into the goal, compared to most sports games that have you "Press X to Shoot!" Take on players from around in the world in ranked, unranked, and organized team matches. Battle your buddies in local split-screen, or challenge the world together in online split-screen mode. Hone your skills offline against a tournament of computer-controlled opponents or by conquering twenty unique, challenging mini-games."[citation needed] 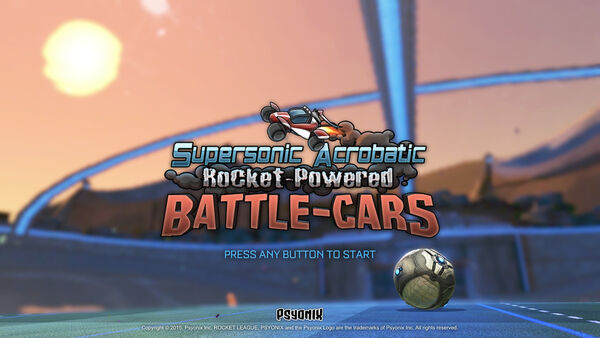 Antenna with the ball from the Urban arena in SARPBC.

Antenna with the ball from the Utopia arena in SARPBC.

Antenna with the ball from the Wasteland arena in SARPBC.

A view of the sunken SARPBC "Galleon" arena in AquaDome. 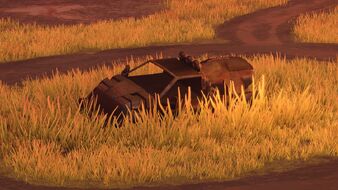 The Renegade from SARPBC showing as wrecked in Farmstead.

The in-game icon of the SARPBC-10 antenna.

The in-game icon of the Floppy antenna, with "SARPBC 2" written on the label. 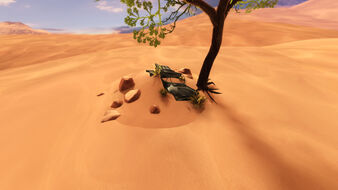 The Marauder from SARPBC showing as wrecked in Deadeye Canyon.

Octane in the Wasteland arena

Octane and Renegade in the Stadium arena

Zippy and two Renegade in the Urban arena

Scarab in the Wasteland arena