Universal Animated Decals
Titles
Season 3 was the seventeenth competitive season in Rocket League and the third competitive season after the Free To Play update. The season officially commenced on April 7, 2021 and ended on August 11, 2021. The season is racing-themed, which is reflected in the Rocket Pass items and DFH Stadium (Circuit) arena, which arrived with the season.

The initial trailer and season details were revealed on March 26, 2021, after a Kaskade concert in Fortnite's Party Royale. It was also announced that Season 3 will include crossovers with NASCAR and Formula One, which came in May.[1]

Note - The Pro Tiers are getting an overhaul with Season 3. Tiers beyond Tier 70 will no longer be hidden. Instead, players at Tier 70 or beyond will now see what item they can unlock 30 Tiers in advance. The ability to purchase Pro Tiers will also return.[2]

Certified items are no longer available in Rocket Pass.

Note - Special Edition items can now be unlocked prior to tier 70, and painted variants will unlock as pro rewards.

The rewards for Competitive and Extra Modes for Season 3 are as follows:[3] 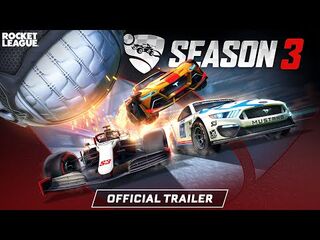