Boost
Season 2 was the sixteenth competitive season in Rocket League and the second competitive season after the Free To Play update. The season officially commenced on December 9, 2020 and ended on April 7, 2021. With Season 2 came a new music-themed Rocket Pass, featuring the R3MX car body and cosmetics that sync with the in-game music; a new customization option called Player Anthems; and a new arena, Neon Fields.[1]

When a Pro Tier item was unlocked, players get a 'Special Edition' version of the Polyergic, Esoto 4R and 3-Lobe wheels:

The rewards for Competitive and Extra Modes for Season 2 were as follows:[2] 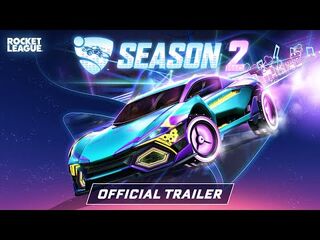