Rumble is an epic battle royale-style addition which released on September 8th 2016 and comes stacked with randomized power-ups. Whether you’re equipped with the Haymaker, the Swapper, or the Tornado, each one of the 11 new power-ups brings an extra dimension to the classic Rocket League formula.

Like the "Hoops" and "Mutator" modes before it, Rocket League Rumble will appear in Online Playlists, Private matches and Exhibition matches. You can also select Rumble-specific Mutators for Private and Exhibition matches, including Slow (20 second cooldown), Spikes Only, along with the categorized modes Civilized, Destruction Derby, and Spring-Loaded. The default online queue is only available in Standard (3v3).

Each player has a 10 second power-up timer that resets at each kickoff and after a power-up is consumed and its active timer is expired. Once the power-up timer hits 0, a random power-up becomes available to activate at the player’s discretion. An unused power-up does not expire and is available until used. So a player may hold onto a power-up and wait to use it, but, once used, the 10 second timer restarts to give them another power-up. Power-Ups reset a goal reset and if there are 10 or less seconds remaining in the match, the timer will change to give it to them at c. 1 second left. (Note: If the timer IS one second, players will IMMEDIATELY get their first power-up.) Only one power-up is available to a player at any time.

In the online Rumble mode, the same power-ups are distributed to both teams (i.e. each team will get Plunger, Disruptor, and Spike to start, for example), and each team has the same power-up queue that is handed out to their members chronologically as they use their power-ups. This is not the case in non-3v3 private matches where power-ups are granted at random between players.

While timing and positioning when using the power-ups are critical, there are general counters between power-ups where they are more or less effective against each other.

Here are the power-ups and what they do:

Effect: Kicks an opponent’s car, giving them a sudden launch of momentum in the direction opposite the kicker. If the opponent already had momentum, this will add to it, not replace it. Most effective to opponents in the air, as the ground friction can counteract most of this momentum very quickly.
Effective against: Magnetizer, Plunger, Power Hitter, Spike, Tornado
Countered by: Grappling Hook, Swapper
Mode Appearance: Default, Destruction Derby, Spring Loaded, Slow
Used best when: Someone is about to hit the ball; Someone is challenging your possession; Someone with spikes and the ball.

Effect: Causes your opponent to drive uncontrollably: Opponent is stuck boosting for a few seconds with supersonic speed and worse turning. They end with 100 boost.
Effective against: Haymaker, Magnetizer, Tornado
Countered by: Grappling Hook, Plunger, Spike
Mode Appearance: Default, Slow
Used best when: Someone is about to take a shot or use a powerup to take a shot; Someone is defending the goal.

Effect: Freezes the ball in place. This has a slight built-in intentional delay, beyond generic online lag.
Effective against: Haymaker, Magnetizer, Plunger, Spike, Tornado
Countered by: Grappling Hook, Haymaker, Plunger
Mode Appearance: Default, Civilized, Slow
Used best when: Someone is about to score or the ball is in mid-air and you want to stall the game right before their goalie is about to hit the ball.

Effect: Latches the user onto the ball, pulling them towards it and then creating a powerful hit when they make contact. The hook itself has no physical effect on anything except the grappling car. Like any hit, the power of the hit is dependent on the point of contact on your car. Will glitch out when trying to stop a fast shot from Power Hitter or a Haymaker.
Effective against: The Boot, Disruptor, Freezer, Spike, Swapper
Countered by: Haymaker, Tornado, Swapper
Mode Appearance: Default, Civilized, Slow
Used best when: Someone is approaching with a dangerous power up (spikes, magnet, etc.); Clearing the ball in awkward spots.

Effect: Punches the ball: The ball receives a sudden launch of momentum in the direction opposite the puncher. If the ball already had momentum, this will add to it, not replace it.
Effective against: The Boot, Freezer, Grappling Hook, Magnetizer, Plunger
Countered by: Freezer, Plunger, Spike, Swapper, Tornado
Mode Appearance: Default, Civilized, Spring Loaded, Slow
Used best when: When there is any opening in net with the ball having momentum.

Effect: Attracts the ball toward your car: the effect is stronger the closer the ball is to the car. Able to swing the ball far from the car making it harder to hit.
Effective against: Spike
Countered by: The Boot, Disruptor, Freezer, Haymaker, Spike, Swapper, Power Hitter
Mode Appearance: Default, Civilized, Slow
Used best when: When having control of the ball.

Effect: Grabs the ball via plunger and cord: It applies a force to the ball aimed at the car, thus if the ball already had momentum perpendicular to the ball-car direction, it will curve around the car rather than towards it. When the ball hits the plunging car, the plunger effect stops.
Effective against: Disruptor, Freezer, Haymaker, Magnetizer, Tornado
Countered by: The Boot, Freezer, Haymaker, Spike
Mode Appearance: Default, Civilized, Slow
Used best when: You are in or near the opposing goal, and there is an opportunity to pull the ball in. Also when the ball is near your opposing goal, someone has spikes or the opponents are about to score. (Note: If a ball is frozen whilst pulling w/ Plunger, it will temporarily stop and then continue slowly with its momentum.)

Effect: Allows you to hit everything harder: Instant demolitions on contact with opponents, every touch to the ball hits much harder. Still can be demoed when in use though.
Effective against: Spike, Disruptor, Magnetizer, Tornado
Countered by: The Boot, Swapper, Tornado
Mode Appearance: Default, Civilized, Destruction Derby, Slow
Used best when: Demoing people or hitting the ball.

Effect: Attaches the ball to your car when you bump into it: Ball stays stuck to wherever on the car it was hit. This can interfere with driving your car if the ball is low enough your wheels cannot touch the ground. The first second it stays fixed regardless of what happens, after that freezing the ball, another player swapping with the carrier, or a significantly powerful hit to the ball can break it loose before the timer runs out.
Effective against: Haymaker, Magnetizer, Plunger, Spike, Disruptor
Countered by: The Boot, Freezer, Grappling Hook, Power Hitter, Spike, Swapper, Tornado
Mode Appearance: Default, Civilized, Spikes Only, Slow, Spike Rush
Used best when: You want to score or to move the ball around the field easily.

Effect: Changes positions on the field with an opponent. Momentum and orientation are also swapped.
Effective against: The Boot, Haymaker, Magnetizer, Power Hitter, Spike, Swapper, Grappling Hook
Countered by: Grappling Hook, Swapper
Mode Appearance: Default, Destruction Derby, Slow
Used best when: Someone has Spike, someone is goalie or you want to get across the field in a better position quickly. Or when someone is about to demolish you.

Effect: Sweeps up the ball and opposing cars into a giant funnel cloud. They fly up and in circles around the tornado's car. Only affects ball and cars above or level with the tornado's car.
Effective against: Grappling Hook, Haymaker, Spike
Countered by: The Boot, Disruptor, Freezer, Plunger, Power Hitter
Mode Appearance: Default, Destruction Derby, Slow
Used best when: When having a chance to clear out the opponents; Controlling the ball and try to move it across the field with the tornado. 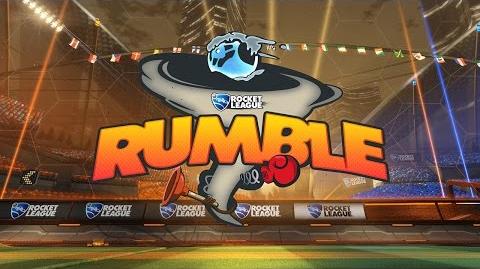 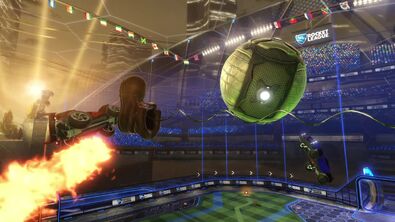 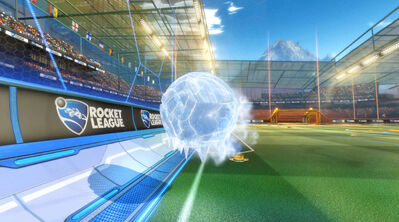 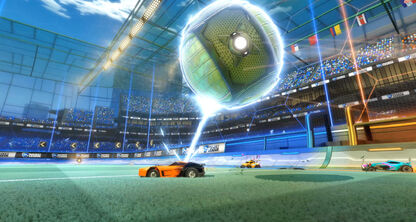 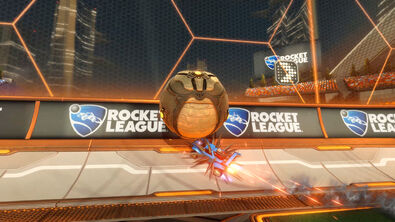 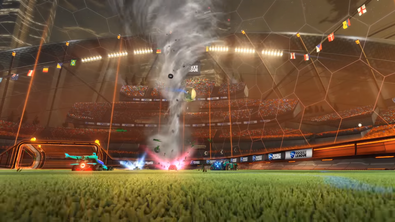