Single-player
Multi-player (2-4 locally)
Multi-player (2-8 online)
Rocket League is a video game that involves the combination of car racing and soccer, created and developed by Psyonix Studios. In the game, two teams of players are pitted against each other in a futuristic arena to duke it out in five-minute matches. Rocket League is the sequel to Supersonic Acrobatic Rocket-Powered Battle-Cars (known as SARPBC), which was created by the same developer.

On 2020-01-23, Psyonix announced it would end support for Rocket League on the macOS and Linux (SteamOS) platforms. The final patch for these platforms was in 2020-03-06.[6] Since then, the macOS and Linux versions are longer updated or supported. Players on these platforms can download and install a version of the game, but many features will not function as expected. Online functionality (including all in-game purchases) is disabled in this version, but offline features including Local Matches and split-screen play are still accessible. Psyonix mentioned in a support article at the time that there are a few third-party tools which may allow users to still run the game properly on macOS and Linux, but that these tools are officially not supported by Psyonix.[7]

On 2020-09-15, Psyonix announced that Rocket League Free to Play will release June 23, 2020. This date was also the day that Purchase/Downloads for new players on Steam launcher was disabled. New Players after Free to Play release can download the game on Epic Games launcher on PC and the platform stores on consoles. [8]

Rocket League has been critically praised, and has won numerous awards. The game has been popular on the streaming platform Twitch and has both a casual and competitive atmosphere.

Rocket League's gameplay expands on the original title, Supersonic Acrobatic Rocket-Powered Battle-Cars. Players control a rocket-powered car and use it to direct a ball larger than the cars into the opposing team's goal in an arena. There are five minutes in a match and the team with the highest score wins. If the two teams are tied at the end of the five minutes, then the winner is determined in a sudden-death overtime period.

Off the field, players can customize their vehicles in numerous ways. There are many ways to earn items for use on one's car or player banner. Also, most items can be exchanged between players via the trading system.

The game is played by one or more players on each team, locally or online. The game features "cross-platform play" on both PS4 and PC, which means that players on either platform will be able to play together. Xbox cross-platform play is not available as of now, due to problems caused by Sony.[citation needed] You cannot download it on Steam anymore after the free to play update. You can download Rocket League on the Epic Games Store.

The following editions of Rocket League have been released, in addition to the base game:

Critics praised both the fact that it is "addictive and fun", as well as the visuals, which "are brilliantly detailed" and "crisp",[13] while the community on Slant collectively agreed that the game is perfect for quick, short play sessions, making it one of the best choices for couch co-op play.[14] 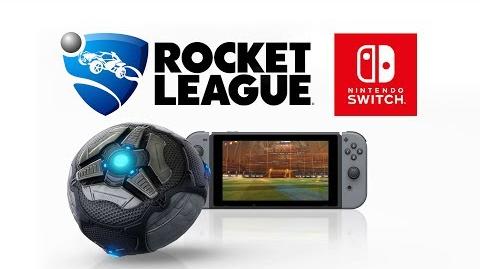 Although not much is known about the universe in which Rocket League takes place, Psyonix founder Dave Hagewood did say the following in a 2015 interview with Game Informer:

That's always been a big question for us. We thought about it for a long time. What is this world that we're making? We don't have a definitive answer on even big things like, "Are these full-sized cars in an insanely-large arena or are these small RC cars or micro-machines?" It says a lot that our focus is on gameplay and making the game fun for the fun of it. We have some ideas that we talk about that we haven't really exposed to people, but for the most part, we've always just kind of said, "Accept it for what it is."[15]