The Knight Rider™ K.I.T.T is a battle-car released on July 16, 2019 along with the "Television" phase of the Radical Summer event.[2] It could be obtained by purchasing it as DLC. It cost $1.99 USD.

The K.I.T.T. is classified as Legacy and Exotic rarity. It has limited customization, as it cannot be equipped with any additional decals, wheels, rocket boost, and antennas other than what is offered in the DLC pack. It does, however, have a single paint color that can be customized on each team, which affects a region on the bottom of the car. Its goal explosion and trail can be fully customized.

As of Patch v1.70, all Premium DLC Packs will no longer be available for purchase. If you already own any items from the DLC Packs, you will still have those items in your inventory. Items from Premium DLC Packs may return for individual sale in the Item Shop at a later date.[3]

A shadowy flight into Rocket League! Knight Industries has crafted its own K.I.T.T. 2000 to champion the cause of aerial goals and epic saves. Self-driving capabilities not included! I’m sorry Michael.[4]

The K.I.T.T. came with the following Wheels:

The K.I.T.T. also came with the following Topper. The K.I.T.T. Gullwing topper moves while in-game, depending on the controlling movements of the player. This is the first topper to behave in such a manner.

The following Rocket Boost was included in the DLC pack. It is also named K.I.T.T.

The following Player Banner was included in the DLC pack. It is also named Knight Industries

The following items came with the Knight Rider Car Pack DLC when purchased for $1.99 or regional equivalent on various platforms.[2]

Body icon from the in-game garage 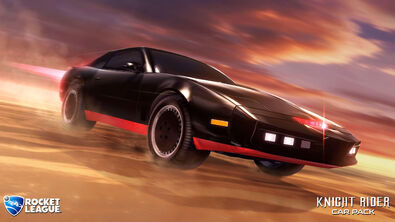 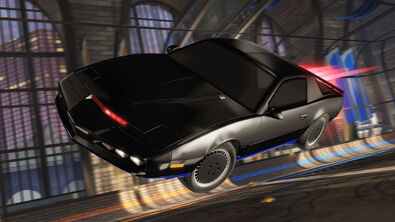 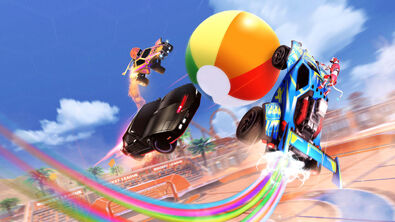