The Fate of the Furious

The Ice Charger is a vehicle body released on April 4, 2017,[3] which can only be obtained from The Fate of the Furious DLC pack.

Its design is based on that of a modified 1968 Dodge Charger R/T.

Now you can own Dom Toretto's Dodge Ice Charger from Universal Pictures' explosive movie, The Fate of the Furious.[4]

The Ice Charger can be equipped with the following decals:

Note: This vehicle can also be equipped with any of the Black Market decals.

The Ice Charger comes with the following Wheels, which can be equipped to any Battle-Car:

The following items came with the Fast & Furious Ice Charger DLC when purchased for $1.99 or regional equivalent in the Showroom or Platforms Stores.:[3] 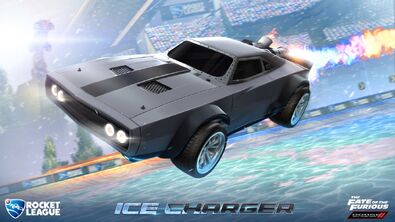