Hot Wheels is an American-based brand of miniature die-cast toy cars, owned by toymaker corporation Mattel, Inc. They have collaborated with Rocket League on multiple occasions.

On February 21, 2017, the Hot Wheels-licensed Bone Shaker and Twin Mill III cars were released as separate DLC packs in Rocket League.[1] There were also some free licensed items released — the "Hot Wheels" topper, the "Shark Bite" topper, and a "Hot Wheels" antenna.[1] The free items are classified as common rarity.

On September 24, 2018, Rocket League released an in-game DLC bundle, the Hot Wheels Triple Threat DLC Pack,[2] which included three vehicle bodies, with decals and a set of wheels to go with each of them, and three toppers.[3] There were also some free Hot Wheels 50th Anniversary licensed items released — specifically, wheels, an antenna, and a player banner.[3] A Hot Wheels-themed arena, Rivals Arena, was released in the same update[3] and can only be played in private matches or local exhibition matches. The free items are all classified as common rarity.

In addition, Hot Wheels manufactures Rocket League-licensed toys. The Hot Wheels Rocket League Rivals RC Set features remote-controlled battle-cars, controlled by mobile devices, in a scaled-down arena with a ball that uses infrared signals to determine when a goal has been scored.[4][5] It arrived in stores on November 1, 2018.[6] Buyers will receive a code for exclusive items in Rocket League — a Hot Wheels Goal Explosion, an RC Rivals topper, and two RC Rivals decals.[6]

Additionally, a 1:64 scale Octane Hot Wheels car went on sale in select stores starting in December of 2018.[7] In 2019, an orange version was released alongside it.[7] Red and lime-green versions were released at later dates.[8] 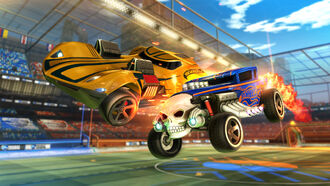 Promo artwork for the Twin Mill III and Bone Shaker. 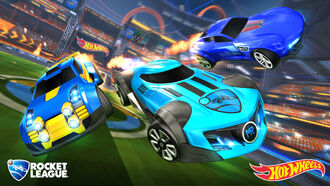 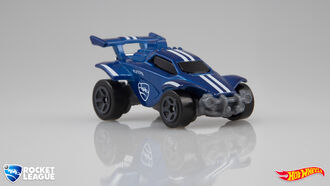 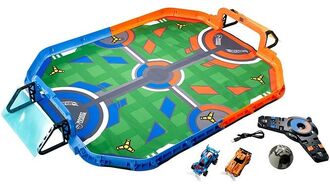