Hoops is a basketball-style game mode added on April 25, 2016,[1][2] in which the goals are replaced by two baskets. It is the only mode that uses the Dunk House arena.

Hoops is available to play in the "Extra Modes" playlist and in offline games.

In online ranked matches, the teams are limited to 2v2. However, in offline games, the match creator can select from 1v1 up to 4v4.

The round begins with a "Jump Ball", which flies up about 15 meters. The jump ball height and the limited boost make it difficult for players to hit the kickoff.

A missed jump ball by one side will often lead to a quick score by the other side. It is advisable to have one player pull back into the net to guard against the missed jump ball.

In online play, players typically struggle to score a lot more in hoops than in soccer mode, as you have to either lift or guide the ball in from above in some way. Because of this, it might be a more difficult game mode to play, at least from a scoring perspective.

Probably the two easiest shots to make in this mode are a lob ground shot, using the backboard as necessary, and a hard-hitting pinch from the corner.

A new striking skill should be developed for this mode when the ball is near the hoop, which is the ability to place your car directly under the dropping ball, but just to one side a bit, just enough that when you jump, it will lift it at an angle, up and over the rim. Developing this shot will yield lots of scores.

Also, the ability to dribble up and around the wall, letting it fall into the hoop. Hitting hard, long rollers on the right path will also achieve this.

Due to the increased shot difficulty, it may be useful to try "alley-oops." In this context, this means that when a teammate has taken a shot, but it appears that the shot will miss, the other teammate should redirect the ball while it is still in the air and try to score.

Players should get accustomed to defending shots from inside the net, and be aware that the ball does not have to hit the floor of the net to score. It only needs to drop about half way between the rim and the floor. 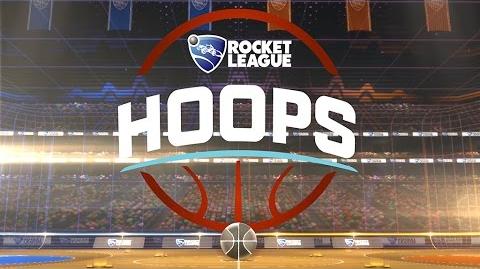 The following trophies were created specifically for the Hoops gamemode: