Engine audio is a customization option in Rocket League. It was added on July 5, 2017, as part of the second anniversary update.[1]

Any engine sound can be used with any battle-car, with the exception of certain licensed engine sounds, such as the Batmobile, DeLorean Time Machine and Ice Charger.

If a vehicle is not owned, its engine audio is not available.

They are currently sixty-five in-game engine audios to choose from:

The following engine audio can be obtained by linking your Twitch Prime account with your Rocket League platform of choice.[2]

The following is an example of the OEM-A engine sound: 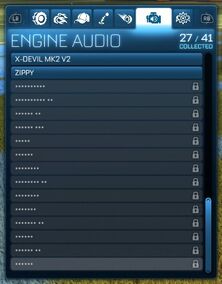 Retrieved from "https://rocketleague.fandom.com/wiki/Engine_audio?oldid=38793"
Community content is available under CC-BY-SA unless otherwise noted.