Drops are a free-to-open version of the old Crates system. They were introduced with the Free To Play update in September of 2020,[1] most likely as a means of providing more free rewards and appeasing the players who missed the concept of Crates. Drops can contain items from all of Blueprint series, including everything from Champions 1 Series all the way to Vindicator Series. This means you can get Zomba wheels, Dueling Dragons goal explosions, Heatwave decals, and so much more.

Drops can be found as challenge rewards, and in the free tiers of Rocket Pass. When opened, they immediately award an item that is added to your inventory. They come in every rarity type starting with uncommon and grant an item of the same rarity as the drop or higher (including Black Market items). The items received from Drops are tradable to other players, but the Drops themselves are not.

Free items earned from Challenges and Drops before the Free To Play update can still be traded in (trade in five items for one item of higher rarity). Free items you receive from Drops after Free To Play are not linked to a specific series, and can all be traded in together as long as they share the same rarity.

Because you can receive so many new items from trade-ins, the much smaller set of items resulted from trade-ins previous to free to play are naturally less likely to appear as a result. This way, highly desirable items such as titanium white Octane have become considerably rarer.

Where to Obtain Drops 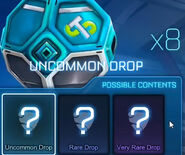 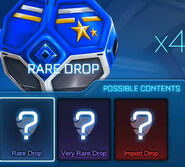 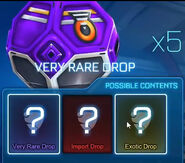 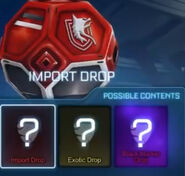