100% × 6
12% × 26
Double Goal is a prototype arena found in the Rocket Labs playlist. It was added into the game on February 10, 2016.[1] The arena features two angled openings for each goal, which form a V shape together, guarded by a triangular awning that protrudes outwards from the wall and holds a translucent pillar in front of the goals. 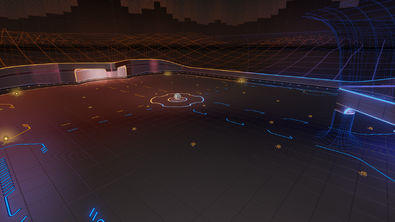 Retrieved from "https://rocketleague.fandom.com/wiki/Double_Goal?oldid=42947"
Community content is available under CC-BY-SA unless otherwise noted.