Chikara G1, Chikara GXT
Chikara is a vehicle body which could be obtained from premium Rocket Pass 5. It is classified as Limited rarity. The car design takes inspiration from anime.[2]

Different variants of the Chikara could be unlocked by tiering up in the Rocket Pass:

All of the three Chikara variants can be equipped by default with the following decals:

The following decals could only be obtained by tiering up in Rocket Pass 5. Painted variants can be traded.

Only Chikara GXT could have painted variants, and these could be obtained randomly after Tier 70 of the Rocket Pass. 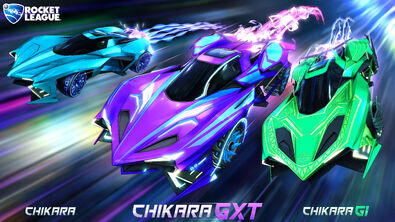