Before Free To Play the body could be obtained by completing matches, This has now changed and instead new players must earn the body via the new driver challenges.[3]

It is the only common battle car not to have received additional decals.

Its design is based on that of a rat rod.

Backfire can be equipped with the following decals: 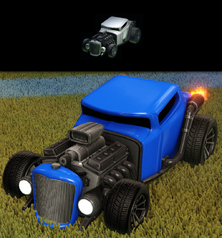