In the year or so following the Skyline's retirement, it became very sought after by Rocket League players,[5] some even buying accounts with the Nissan Skyline on it, which is against Terms of Service. When the news hit that the Nissan Skyline was coming back, a lot of people were really happy to be able to get it again.

On June 10, 2021 Psyonix announced that Fast & Furious Nissan Skyline will return in new Fast & Furious Bundle and as Single Car Pack and will be available from June 17 to June 30, 2021 in the Item Shop.[6]

As of Patch v1.70, all Premium DLC Packs will no longer be available for purchase. If you already own any items from the DLC Packs, you will still have those items in your inventory. Items from Premium DLC Packs may return for individual sale in the Item Shop at a later date.[4]

The '99 Nissan Skyline GT-R R34 can be equipped with the following decals:

Note: Vehicles can also be equipped with any universal decals.

The '99 Nissan Skyline GT-R R34 comes with the following wheels, which can be equipped to any Battle-Car:

The following items came with the Fast & Furious Nissan Skyline GT-R DLC when purchased for $1.99 or regional equivalent in the Showroom or Platforms Stores.:[8] 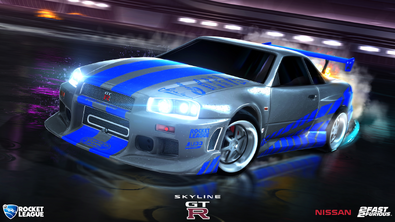