Cruise the pitch with Dom Toretto's 1970 Dodge® Charger R/T from Universal Pictures', The Fast and the Furious™.[4]

The '70 Dodge Charger R/T can be equipped with the following decals:

'70 Dodge Charger R/T comes with the following wheels, which can be equipped to any Battle-Car:

The following items came with the Fast & Furious Dodge Charger R/T DLC when purchased for $1.99 or regional equivalent on various platforms.[5] 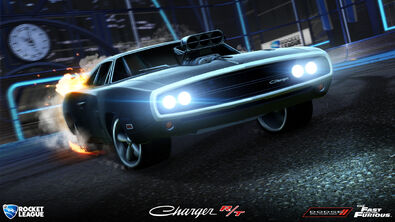 The '70 Dodge Charger R/T in the Urban Central arena.