View source
watch 02:19
Wiki Targeted (Games)
Do you like this video?
Play Sound

Batman v Superman: Dawn of Justice
The '16 Batmobile is a battle-car released on March 8, 2016,[4] which could only be obtained from the Batman v Superman: Dawn of Justice DLC pack. It is not compatible with most decals, wheels, rocket boosts, trails, or anything else other than the items in the DLC pack that go with it. It can only have its paint color and goal explosion changed freely.

It was originally named simply "Batmobile" but its name was changed due to another Batmobile available on March 5, 2018.

Although not as popular as other Battle-Cars used in the Rocket League Championship Series, it has been favored some by pro-level players.[5]

As of Patch v1.70, all Premium DLC Packs will no longer be available for purchase. If you already own any items from the DLC Packs, you will still have those items in your inventory. Items from Premium DLC Packs may return for individual sale in the Item Shop at a later date.[6]

"Black and blue, god vs man, day vs night!

Unleash your own one-car reign of terror with the official Batmobile Battle-Car from the highly-anticipated film, Batman v Superman: Dawn of Justice!"[7]

The '16 Batmobile is not compatible with any other wheels besides this one.

The '16 Batmobile is not compatible with any other boosts besides this one.

The '16 Batmobile is not compatible with any other trails besides this one. 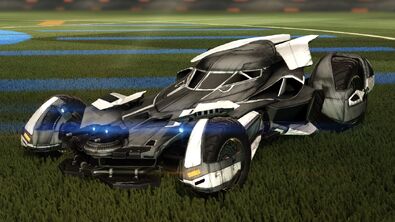 In-game preview of the '16 Batmobile. 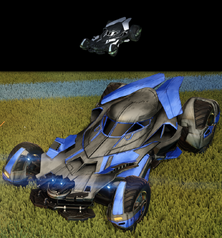